Want to find out more about your own chart ? 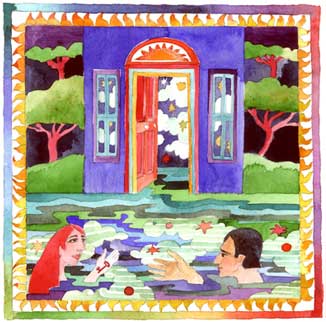 "Saturn and Venus this year in conjuntion !
What says the almanac to that ?"
Shakespeare. Henry IV

Astrology states there is a correspondence between what is going on with the planets and the individual. It says that the universe and all of it's constituents are not separate entities but are intrinsincally related to each other in a unified whole.

"Our birth is but a sleep and a forgetting: The Soul that rises with us, our life’s Star, Hath had elsewhere its setting, And cometh from afar: Not in entire forgetfulness, And not in utter nakedness, But trailing clouds of glory do we come From God, who is our home" - William Wordsworth

When we were born we were already formed whole with a certain personality and nature. By using Astrology and its elements we can begin to understand what that nature is.

The art of astrology involves a number of different essential components. The Planets, the Signs , the Houses, and the Aspects (or Links) between the planets.

There are ten planetary bodies in all. With some new ones still debated by astrologers. These are : The Sun, The Moon, Mercury, Venus, Mars, Jupiter, Saturn, Uranus, Neptune and Pluto.

Each planetary body represents a particular energy in the world. This is backed up by many years of observation, literature, mythology and indeed words in common use in our language. For example Mars was always known as the God of war and strength, the colour red epitomised energy and sexuality. Words like martial derive from it and are associated with a military order. Mercury on the other hand was always seen as a force of communication because of how quickly it moved and hence it's nickname Quicksilver and the word Mercurial meaning changeable. In mythology Mercury was the messenger of the Gods. Jupiter on the other hand gave rise to words like Jovial. With it being an enormous gas giant with many orbiting moons it was always deemed as an expansive, positive, lucky force. Indeed many times the earth has been saved from meteors by Jupiter absorbing them on to it's surface.

As the planets epitomise these energy forces so does the individual have those principles within his nature. Some of us are larger than life like Jupiter, others great communicators like Mercury and some great athletes and soldiers or even despots as epitomised by the Martian principle.

Each of us have these same planetary forces within us so why do people express these forces in different ways ? It is to do with where in the Zodiac the planets are to be found.

The Zodiac is divided into twelve equally sized signs. They each compose 30 degrees of the total 360 degree Zodiac. The signs beginning from late March are Aries, Taurus, Gemini, Cancer, Leo, Virgo, Libra, Scorpio, Sagittarius, Capricorn , Aqaurius and Pisces. They approximately although not exactly correspond with the named constellations in the sky. The Zodiac is the backdrop or canvas on which the planets are to be seen. For example Mars could have lay in the constellation of Aries at the time of someones birth. Essentially this means that looking at Mars from the point of view of the earth, the backdrop of stars behind Mars would be those of the Aries part of the Zodiac. Similarly each of the planets have a backdrop to them and depending on your birth time each can lie in any of the 12 Zodiacal signs. Conventional astrology just deals with which constellation the Sun lies in at you time of birth. I.e She's a Leo would mean the Sun at the time of her birth lay in front of the constellation of Leo. Although I wouldn't advise looking to see !

What do all the Zodiacal signs mean ? Just as the planets represent different forces, so the Zodiacal constellations are like a filter that colour those energies in a certain way. Lets take Aries for example. This is the first sign of the Zodiac. It is to do with the season of spring and rebirth after the dormant winter. New life is to be seen everywhere, there is hope after the Winter. Aries is essentially about new beginnings about vibrant free flowing energy, indeed it is the first of the fire signs. As the first sign of the Zodiac it is very much to do with innocence and childhood and a slight naievity. It is the begining of an adventure. If we look at say Cancer however this is a different sign altogether. This is a water sign to do with family, the past, and nurturing and it expresses itself through feelings. Now if we take the planet Mars. If we find it in Aries the flow of energy would be dynamic and uninhibited say for example like an army commander or an athlete or a person with a temper. If we find Mars however in Cancer the energy would be more inhibited and would say only surface if a friend or family member was threatened or the energy could manifest in an emotional outburst.

The ten planets taken together can therefore lie in a vast variety of different Zodiac combinations. Given this and taking the link between the planetary positions and peoples characters one can see one of the main reasons why there would be so many different personalities around. Astrology does not believe personalities are formed solely with the growing process, it believes the fundamental makeup of a person is already there at birth just waiting to be expressed.

In addition to this astrology has the idea of houses. We mentioned previously how the planetary energies are filtered by the sign they are in. The house position however adds to this by saying in what areas of life these energies will predominantly express themselves. The houses are numbered from one to twelve. The first house begins at the ascendant which is the eastern horizon of the chart. As one moves around the chart the house numbers go up until one reaches the twelfth and final house. The first house and the ascendant are very much to do with the individual and their self expression, the fourth house the lowest point of the chart is related to a persons roots and family, opposite the ascendant is the descendant which is the beginning of the seventh house which is to do with the individual meeting and relating with others. The tenth house is to do with career and being out in the public eye. The twelfth house is to do with surrendering to the universality of all things. As you can see the journey around the houses is a journey from self awakening of the individual, having their experiences in the world, to eventually returning all this back into the collective consciousness.

If we add the house area of a planet to the previous information we had, which was the planetary energies filtered by their sign, we now can say in which areas of life those energies will express themselves. E.g to do with the individual, to do with family or to do with relationships. An example is Mars in Aries in the seventh house. Uninhibited energy expressed via relationships with another person. Sounds interesting !

As you can see taking all this information into account makes every chart unique and adds to why the art of astrology is so challenging and fascinating.

One thing never to forget though is that the stars impel us, they do not compel us. We are all free people and we can transcend our astrological makeup. Acts of Kindness and Sharing are said to take us beyond the stars to the source and thus alter our destiny.